A Crisis That Won’t Quit 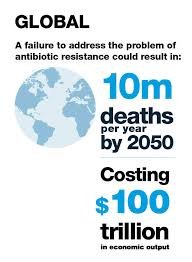 During much of the period through 2050, the annual reduction in global GDP caused by AMR could be as large as the losses provoked by the 2008–2009 global financial crisis, at their most severe.

However, the cost impacts of AMR on GDP would be worse than those of the financial crisis in two respects. First, they would be felt during the entire simulation period (through 2050), not just for a couple of very bad years, as was the case in the acute phase of the recent financial crisis.